It was a dinner date that was all mixed up, all because the other party was half asleep and I did not read his sms so at precisely 6.30 pm, Kress was outside my house waiting for me and I who just woke up from an unnecessary late afternoon snooze went helter skelter running around to get ready and was out of the house in 10 minutes complete with sleepy face.

So since we were not scheduled to go anywhere it was a toss up between Chinese and Indian, and since someone sent me a comment the other day saying I was discriminating  because I only seem to talk about Chinese Food, which is something that is so not true although I must admit I do tend to veer towards Chinese Food because of the variety and different cooking styles. And I do go to Indian places but I have to admit I do not eat spicy food and whilst all my friends of different races would be stuffing their faces with mutton curry and fried chicken and copious amounts of vegetarian dishes, and the fried fish and roti canai and all, I am a Rava Thosai person.

Rava Thosai and Coconut Chutney. Anytime of the day be it breakfast, lunch, tea and dinner.  Also I don’t like spicy hot food and at times I won’t even eat my Thosai with coconut chutney if the chutney is too spicy.  So ladies and gentlemen, hence for the non Indian food critique.  I mean there is only so much I can say about thosai.  I do have photos of places I eat at, but its always the same old thing.

Well today I decided on Saravan Bhavan.  Now I have been to two of their outlets, one in Bangsar and the other in PJ state.  Saravanan Bhavan serves vegetarian food and has outlets all together, and it is also worldwide. So expect something different when you go there. I mean with outlets in India, Canada, UAE, Bahrain, Qatar, the USA, UK and Singapore, I am sure you would not go wrong eating in a place like this.

Now why I choose Saravan Bhavan? I like the comfort of being seated in an air conditioned place, choosing stuff from a pictured menu, where the kitchen is away from the customers so you don’t feel the heat and stickiness, and where these Indian cooks cook a whole lot of varieties of Thosai, and a lot of other different Indian staples like Chappatis, Pooris, Idlis, Bhaturas, Naans and Parottas and various other Southern Indian cuisine in comfort.   I did a rough up and down count of the menu and found close to 300 dishes in all, and they even have a Chinese Corner.  This will be another episode obviously.

So we got seated, parking was a cinch by the way being Saturday evening and all. We got a park right in front of the restaurant.  I had a bit of problem understanding the waiter, I really did not understand what he said and in true Kress Thong fashion, when you don’t know you smile and point so that’s what I did since being colored, it meant the waiters would ask me what I wanted instead of the Chinese guy. Funny how that works in most places.

So we ordered Gobi 65, Medu Vadha, a Curd Vadha, an Onion Masala Dosa and Paneer Dosa and for beverage we had Masala Milk.

Frankly speaking I had no idea what I ordered, I knew what they were ingredients wise but I did not know what it tasted like.  So out comes the Curd Vada, which is Vadai soaked in a slightly spiced yoghurt. This was topped with mint leaves, a bit of grated carrot, and little crispies which most of us would be used to eating it as a snack.  Still those crispy bits added a bit of crunch to this rather wet dish. The yoghurt was fresh yoghurt and so it had a nice cooling taste to it. In fact every time I bit into something spicy I took a spoonful of yoghurt.

The second appetizer was ordinary vadai with coconut chutney and dhal curry or sambar.  Rather ordinary I might add, but still it was nice. I could have chosen something more daring but I thought since Kress hadn’t eaten here before so I thought it would be nice to play safe. I wish though, that the Vadai was served freshly fried and piping hot. It would have been a lot nicer and a tad bit crispier.

Now our Masala Milk was not something I had expected. It was filled to the brim and it had saffron (not turmeric) used to color it yellow and it had bits of

almonds.  It was not sweet at all, which was a bit strange because Indian milks are usually sweet. Perhaps in my lack of understanding of what the waiter had said, I may have nodded and smiled when he said less sugar. It was different and rich, and I could have had another cup. Also I wondered why it was served in slightly bigger bowl like cup, I thought it was so that the milk would not spill. Well silly old me… culture shock! The reason it was done is that so one can cool the milk a little and make some froth much like a cappuccino or frothy milk.

Well we learn! Actually I learnt it from the Chinese Family sitting at the next table.  After watching them, then only did I realize others were doing it as well.

Do you notice any masala????

Along came Kress Onion Rava Masala.  Now it looked like an Ordinary Rava Dosa to me, and we kind of forgot about the Masala bit amidst feasting on the rest of the food.  So in the photo, you will notice the Dosa looking rather flat and ordinary.  Strange I thought because it was suppose to be special.  Not wanting to sound ignorant I would have thought it would be served in a nicer way to present the Masala, alas this was not done. We

Now we notice the Masala...

only found the Masala (thick potato and spices) folded at the end of the Dosa,  which was strange because we only found the filling quite by accident and so that particular meal experience was lost. As far as I have always known, a Masala Dosa always has its filling in the middle of the dosa.  So once you cut through it, the Masala filling is visible.  Well maybe they forgot about the filling till the very last moment.

The Gobi 65 came and it was fried cauliflower, which was coated in I believe a

chick pea floured tandoori spiced batter. I was crispy and nice. Much like a tempura only with a bit more ommph!   Drizzled with lime juice, to me this was the best part of the meal.

No doubts everything was nice, but this one took the cake.  Each cauliflower floret was coated well and none stuck to each other.  I have had tempura vegetables all pasted together a few times and this would look like a shocking oily piece of mush.  Not Gobi 65 though. It was perfectly fried I thought.  Just lovely.

My Paneer Dosa came.  Paneer is cottage cheese or more so like a ricotta cheese.  I was a bit skeptical about my Dosa because I usually eat Rava Dosa because the dough is not fermented whereas normal Dosa tends to be fermented for hours and after eating it I get all gassy and start burping.  However, my Paneer Dosa was just right, not sour at all, and the filling was perfectly spread out unlike the Masala Rava just

My paneer was mixed with Tandoori ingredients and had a nice taste to it.  There was a slight bit of spiciness to it, a bit too much for my liking, so I ended up finishing the yoghurt from the Medhu Vada. Still the taste was nice. No complaints at all. I would recommend it and order it again.

For dessert, Kress wanted Palkova.  Both of us did not know the name I knew palkova but the one served here in Saravanas is a bit different. To me it looked a lot like Balfi. Again a language problem occurred when my pointing to row two 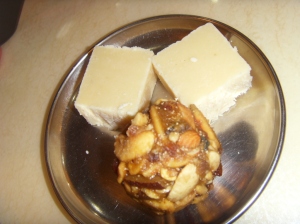 with two fingers ended up with us getting 2 pieces of Palkova and I, in line to eating healthy, ordered a Mixed Fruit Ladoo.  We both enjoyed it a lot.  Kress was not to keen with the Mixed Fruit Ladoo because he said it was much like fruit cake.  The Palkova was perfect, really it was.  What a sweet ending to an unplanned night.