I chanced upon this restaurant while I was doing my morning walk. It was 6.45 am and I saw these ladies arranging the tables and chairs outside the restaurant.  I took a peek and saw it opened at 7 am and what caught my eye was the Kolo Mee something which I have heard off many times but never eaten before.

So much for walking and all, I rushed back showered, and came back to Tai Tong for my first Chinese Brekkie.  As I walked in, about 30 minutes later, the restaurant was only half full and this was 7.20 am.  I walked to the counter to choose my meal and for some reason people looked up and the lady who was arranging the table came running up to me to say they serve pork. So me being me, said it’s fine, I don’t mind.

So I picked my Kolo Mee.  The taste was much like Kon Lo Mee, but perhaps this was a bit drier.  Now for the life of me, I cannot seem to find the photo.  Which is odd because I knew I took a few photos of my meal.  Anyhow, it was good, rather comforting and I knew I’d be back.  in fact I was back in the evening and they were closed.  Then I went back Sunday morning and finally saw the opening times which was 7 am to 4 pm Mondays to Saturdays. 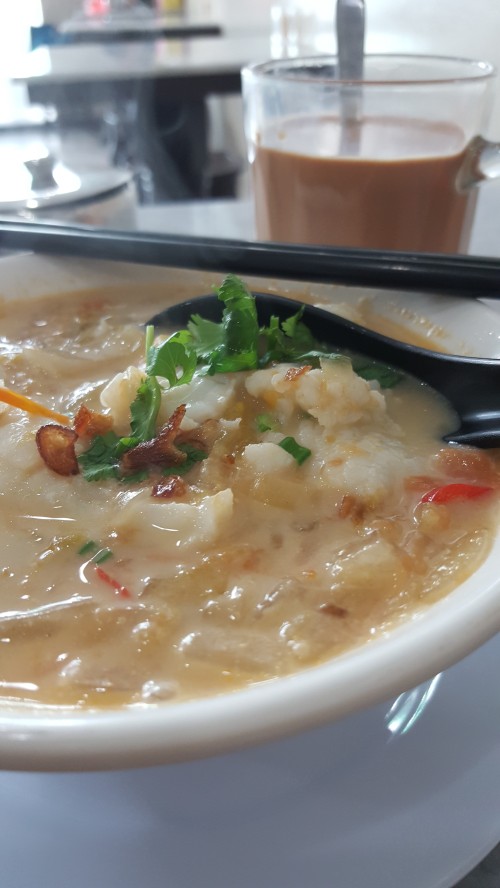 So Monday, I went back. This time I had jook, and it was fish jook, because it looked nice in the photo and they used fresh fish because I didn’t want a smelly fishy jook, which the lady assured me.  And so the fish Jook came.  The aroma was was a nice scent of sesame oil and scallions and a hint of fish.  First mouthful, was wonderful. In fact while I am typing this, I am salivating.  The rice was barely visible so it was cooked properly and they did not use broken rice.  It was good.  I love Jook… I can have bowls and bowls.

Portions and just nice as well, and for me I found it rather filling and the price was always around RM8.50 with a drink of Milk Tea of Coffee.  And today being Monday, the restaurant was full at 8 am. 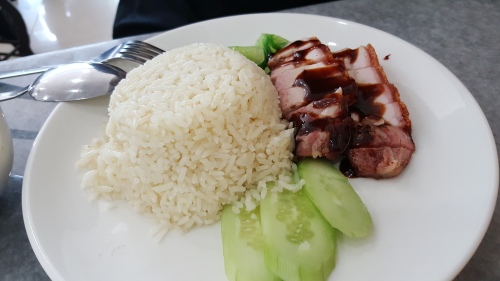 I went back for Lunch that day with a friend.  She had Won Ton Noodles with Char Siu and Siew Yok  plus a plate of Siew Yoke Fan while  I had fried Won Tons.  and I picked at her food.  Lunch time was crowded.  Meats were very nice and not skinny sliced pieces.and the rice was cooked with good quality rice unlike what we get here in PJ sometimes.  I also found the portions much bigger for lunch. A bit too big for me. 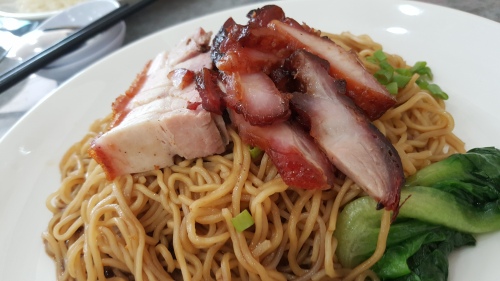 Won Tons were freshly made.  It had a nice bite and enough good filling and not fillers like many others.  I do wish they’d give more veggies though. Seems like I am the only one wishing for more.

Then my next visit for breakfast, by now the ladies were quite friendly and they recommended me to try their fish noodle soup.  I did ask a lot of questions about it before saying yes and she assured me I’d like it. and so when it came, ohhhh my God… it was just fantastic.  The Hum Choy was cooked till it was soft and the flavors were infused very well in the slightly milky sauce.  And the fish just gave that added flavor.  I was hooked.  In fact I had it almost every single time I went there and I went there quite a bit.  I ordered it for lunch and found the portion a little too big for me. I even asked if I could have the breakfast size and pay lunch time rate but she said no.  Still I finished the whole bowl at lunch as well.  This had to be the best thing to happen.

I did try to be smart and changed the Mee Hoon to Koay Teow but somehow the flavor wasn’t absorbed as well. Mee Hoon rules.

Friend had Char Siew Fan.  Meat was a plenty, and they gave a nice tasty soup as well – with a bit more vegetables.

All in all I was never ever disappointed in this place.  For some odd reason, quite a few photos are missing. Hmmmm…..

I will look for them and load it later.

I seldom enjoy seafood unless it is sashimi. I am sure everyone who knows me or reads my blog knows that. So when the boys decided to take me for  seafood one night while in Kta Kinabalu. I cringed but smiled and said ok.  There were three of them anyhow so I guess I was outnumbered.

When we got there, I noticed there were many shops all lined up selling seafood.  This was not anywhere near the sea I can tell you that. I mean the sea was just walking distance, but still, I’d expect it to be near the sea.  So we walked pass many shops, some full to the brim, some quite full, some quite empty and Welcome Seafood was right at the end of the row. Why we parked right at the first shop still baffles me.

Looking around the restaurant while waiting for a server, it was nice to see all the different races sitting together and having a meal without any consequence.  The ambiance was pretty ordinary.  We were sitting outside and I don’t think there was an air conditioned section because that’s what I was told by three people who wanted to smoke.

Anyhow, they ordered since they knew best.  Looking around again, everyone seemed happy. There were some Koreans around as well and they seemed happy as well.  All in all everyone looked happy. I was just hoping everything would not be so fishy and prawny that I would be sick. 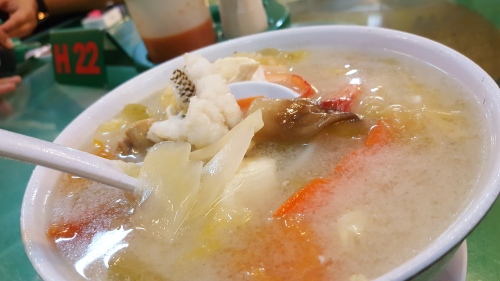 Soup arrived. I wanted Hum Choy Soup with seafood of course.  The soup looked refreshing so to speak and didn’t look like a bowl of boiled seafood.  I just didn’t want to taste anything fishy even though it was seafood.

The soup was really good.  They used Sea Bass and it was nice biteable pieces and not fishy at all.  The vegetables remained crunchy and still a tiny bit salty.  It was truly tasty and I could have had it on its own without anything else.  The slight tinge of sourness gave the soup that bit of kick.  I was hooked. I finished the soup when everyone stopped picking at it. 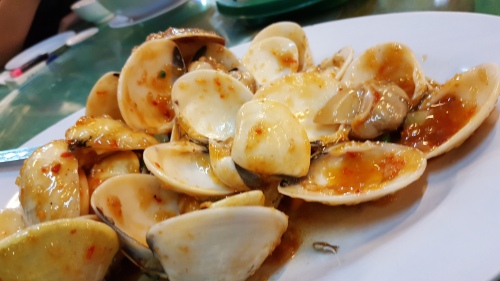 Next was the Clams.  Clams I don’t mind  but they need to be big because I have no patience fossicking through small clams and finding them empty.  It still baffles me how people eat those small clams you get around this side of Malaysia because it is a capital waste of time to me.

The clams had that bit of spiciness that was enough to want you to pick up the empty shells and lick it or suck it, whatever you might do in these situations.  I didn’t do any of those things of course, but I might have.  The sauce was good enough on its known and the freshness of the clams added to the just right flavor.  I think we could have ordered a bigger portion.

The Butter Prawns tasted nice. I didn’t pick at the prawns because I didn’t really like to mess up my fingers.  The sauce tasted nice with the rice.  Everyone sat and tucked in properly while I picked at the curry leaves.  It was tasty trust me.  I wouldn’t have minded if the prawns were peeled and perhaps a bigger size. These were just too small to mess around with.

Ok I am fussy!

The fish was very good.  Although I am not one for fish with bones and all the rest, this was nicely fried and the fish was fresh. The Thai sauce that was poured all over it simply lifted it to another level.  This was enjoyable.  I cannot seem to remember what fish it was for some reason, but it would be something I would reorder.  Again I think the fish was a bit small, but it was crispy and tasty.  Size matters ok.

The slices of onions and bits of slivered mango and chilly, tossed into the sweet chilly garlicky sauce gave the flavor an uplift. The whole dish was polished clean.

I needed my Veggie fix.  Everyone I knew I Kota Kinabalu didn’t eat vegetables.  When I go out with any of them, I would be the one picking the vegetables from their plates and eating it.  This seafood and Siew Pak Choy medley was perfect for me.  At  least the prawns were peeled and the fish complemented the vegetables very well.  I ate all the vegetables because no one really wanted it.  I love my vegetables.

Then dessert came.  I was told this is only in Kota Kinabalu, but I am sure it is available here in West Malaysia as well.  This was a nice end to a rather heavy meal so late at night. This jellied coconut was just the right temperature and it was just nice sweetness. This I enjoyed as well. 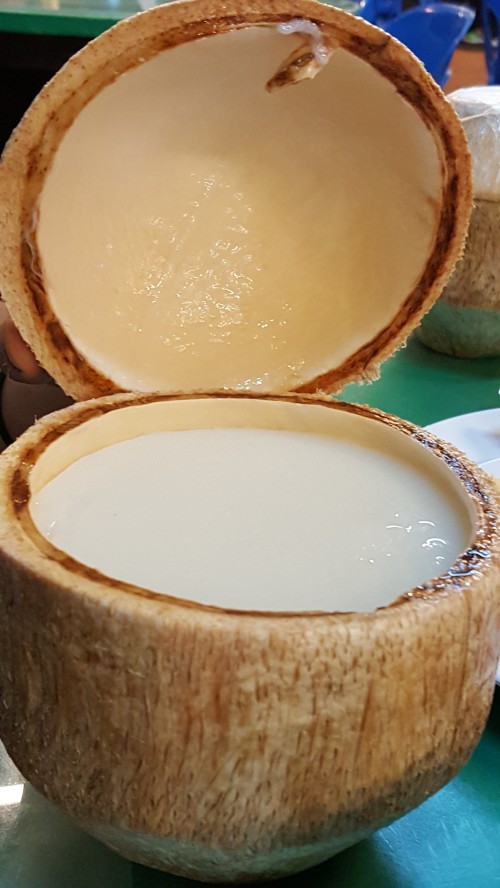 They remove the coconut water and jelly it with agar agar as well as adding some coconut milk before pouring it back, so the hot jelly mixture hardens and also gets infused with the coconut flesh inside.  The result is rather incredulous.

It was truly satisfying I must say of the whole meal.  I would still prefer to eat before 7 pm at the very latest but I don’t think I ever did when I was there.  Still it was a good experience.

I would go back for sure for seafood. These are many places there as well.  And strangely it was so close to where I stayed.  Everything can be so close in Kota Kinabalu and you only realize it when you drive around and suddenly you’re back home.