After an all day thingy in Brisbane City while waiting for my cousin Kevin and his wonderful wife Suzie to finish work, Dan and I walked around Brisbane’s Queen Street and I think we both found it rather uneventful.  Nothing tempted us to spend unlike Melbourne, the food, well we were quite full because we had or at least he had a heavy breakfast courtesy of Sandi.  Sandi spoils us I should say.

Anyhow as usual we got our roads mixed up and so we had to race up the street and I was actually getting hot under the collar, close to sweaty, when I chanced upon Suzie sitting on a bench waiting for Kevin.  What a relief!

So we drove around and I really did not know what to expect with German food in Australia as if you have read earlier my encounter with a German Restaurant in PJ was kind of so so, and it was not the first time as well that I had German so keeping my fingers crossed and as positive as I could be we finally reached the place.  Parking was a bit of a problem but Kevin managed a la true Malaysian style.

Black Forest German Restaurant was a sight to behold with all its Christmas Decorations. Then I remembered Christmas in July.  The whole place was a picture book of Christmasness, complete with Santa Claus and angels and the works. The cosiness gave a very family feel to the place, it was like a home with a very big family waiting to get together.   Black Forest is family run, so don’t be surprised to see the owners wife who is Asian, serving you garbed in a German costume.

So we were seated and I noticed there was a booking for a big group of about 20 people.  I was told you need to book even on a normal day or you won’t get a place.  So there you go, as over the top as it looks and sounds on their website, Black Forest rules!

So we ordered our drinks, all took lemon lime bitter for some reason and it was a good size I might add instead of little miniscule glasses that finish after two gulps.  I did have a tough time on what to choose as I peeked at the next table and realized portions were rather big.  So I let the three of them choose and so I made my choice after that.  It was non sausage like the rest.

To describe these three 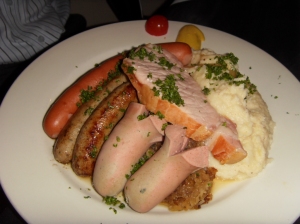 large plates of sausages and pork slices is not easy, they were all nice, and I still had a sensitive tongue.  The sausages unlike what I have tasted in Malaysia tended to be smoother and more solid. When I say solid I mean it was meaty and heavy, and extremely tasty.  I believe Dan and Kevin had the Nuernberger Rostbratwuerstchen which as you can see was a pretty big plate of all things sausages.  I did like the combination of sausages as it was a nice color and not too over fried as I have had sometimes.  The mash potatoes were nice and 100% not the boxed kind.

Suzie had if I remember well the Grill Teller which had a piece of steak, pork chop, chicken chop, sausages and it was served with a large amount of potato salad.  She is eating for two by the way.  I wish I was hungrier, as I love sausages and could have eaten more.  The mix of meats were tasty flavorsome, and most importantly they did not taste the same.  The potato salad was good because they used the correct pontiac potatoes and not the usual mundane kinds we get here.

As for my dish, for the life of me I cannot remember what it was, simply because

I wanted to be different. But mine came with a large amount of pork slices, with a sauce which I thought was rather ordinary but the pear cooked in wine with cranberry and with a dollop of crème fraiche.  And for the carbos on my unlike the others who had potatoes I had two slices of stuffing which had bits of chestnuts and herbs.  I thought that was a good choice.  For my vegetables I had purple cabbage which was sautéed.  This gave the whole dish a very nice color combination.  I ate all my food, because it looked and tasted nice.  The others did not… pity I could have had more sausages.

For Dessert, we decided on one Dessert and it was Heavenly Delight.  It was a waffle kind of base served with morello cherries and a dollop of ice cream.  I think there should have been a hint of Kirsch to give it a bit more oomph.  I did not eat much of the dessert as the sourness was stinging sensitive tongue.

The bill…AUD132.  I thought it was not too bad actually because certainly if we had it here in Malaysia it would have been a lot more.

I’ve always been a fan for lightly tasting food and this hit the spot.  Nothing was overly spiced or herbed, it was just nice.  I would like to go to Black Forest again when I go there next, this time on a totally empty stomach!

Posted in Restaurant and Food Reviews