Wedding Cupcakes and the Matching Topper 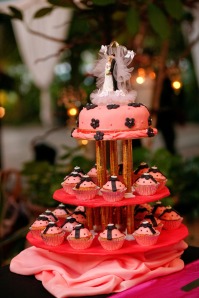 I made this cake for a friend of mine who just got married about three weeks ago. At first I was a little bit apprehensive about the flowers she wanted but in the end I had no choice because she insisted.

The flowers look like hybrids of flowers we drew as kids. But still I think its fun

to do stuff like that as part of your wedding cake and break from all traditions. You Go Joceline!

I am also lucky she took photos because I clearly forgot and when I went to assemble the cake, we could not set it up because of the heat. So the restaurant assembled everything for me in the end. Still I thought it came out nice.

These were photographed by a photographer. Wonder if they could have done a better job with the other cupcakes eh Karen? What do you think? This photo here to me just adds romanticism to an otherwise animated cupcake.

The wonders of the camera lens, wish it would do that for me when I stand in front of it.